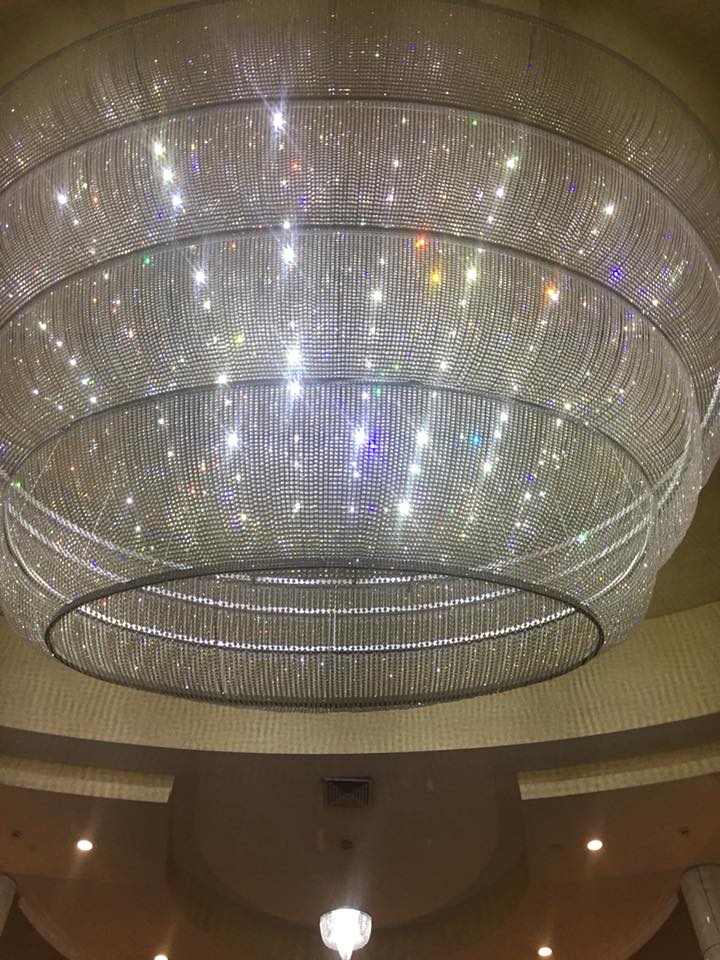 The How to of chandelier lighting: Achieve the brilliance you desire

The tyranny of chandelier lighting,

if your not lighting the prisms, then your not refracting light, then the chandelier won’t appear to sparkle as it’s meant too.
See how the bottom of the luminare looks dull without sparkle?

Chandeliers are Usually positioned in dominant viewing positions like high ceilinged lobbies or in the void above staircases. As a feature designed to attract the eye and impress the viewer with a feeling of grandeur.

Direct lighting is required to enhance the sparkle and glitter as the light is refracted from prisms. This is especially a problem now with the influx of LED lighting into the hospitality sector. Without proper specification the wrong LED luminaire may be used. LED are renowned for luminance and not illuminance.

We only see reflected light

It’s hilarious that the 3-D visualisation/realisation developers add a smokey haze/atmosphere to locations like art galleries which of course wouldn’t  have them. As a film lighting practitioner I can vouch for how much atmosphere the Americans like to add, even for realist drama.
As the light we see is only reflected light, then how do you sell a sharp beam spotlight in its normal use?  You fake it of course!
https://youtu.be/8Da6DHVK17M

I can understand the importance of lighting the beach at night in such a high profile holiday destination such as Surfers Paradise. People choose to come here because of the famous beach so why leave the beach solely for daylight activities? The sand is just as soft white and clean at night as it is during the day.
But what is also equally important is the connection between the beach and the commercial precinct. The space where you cross the road from the hotels you're staying in and make your way along the foreshore boardwalk.
The problem is walking along the boardwalk at night is unbearable due to the glare from the flat panel LEDs . These panels are asked to light everything from the curbside to the high water line.

COST IS THE DRIVING FACTOR

I can understand the cost is the driving factor here (we already have poles here so let's just use them), but surely a compromise could be made. Floodlight the beach by all means but the boardwalk and the plants & shrubs and landscaping bordering it should defined differently. By separating the different spaces with light you define the space and its use.
As film and TV lighting designer you soon learn that it's important to use different light sources for different scenes within the same overall scenario, for example if you want to light a portrait of someone sitting in a chair and light the wall that the chair rests against as well you might be tempted to think that one light can do both things, but if you want the wall to have texture or relief you need to have the light source oblique from the point of view of the viewers, but then the subject in the chair would be subject to harsh shadowing, the answer is to light the two planes separately.
The same process can be applied to landscape lighting. Define the dominant point of view, isolate the interesting elements with light, (or shadow) and create a tableau. Viewers will be enchanted. 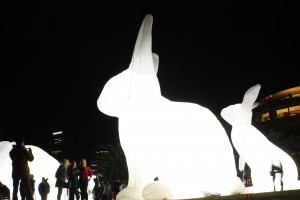 Vivid enjoyed another great year in Sydney.  Even better was the late autumn weather.  Crowds exceeded last years record numbers.  Again the projections were the crowd pullers.  Its great that the vivid organisers have developed different streams for the applicants, as event projections are completely different from architecural lighting and light sculptures. 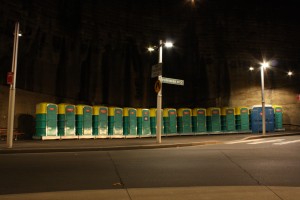 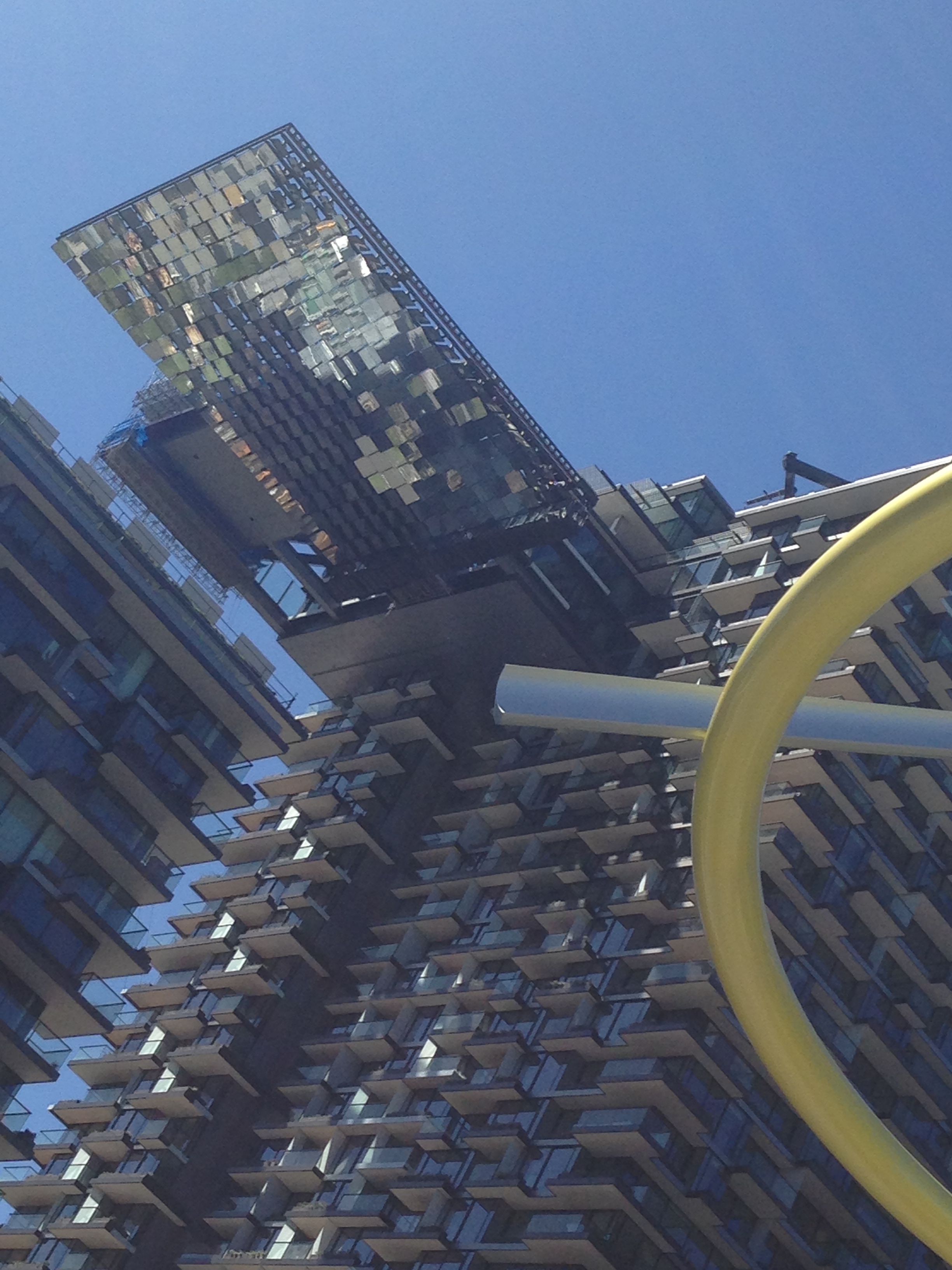 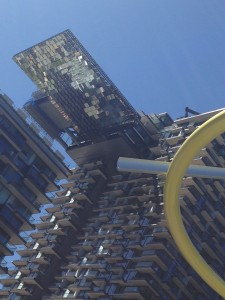 Exciting new architecture project being built in the City south The eastern tower features a passive solar design (a heliostat installation) extending from the upper levels on a monumental cantilever. The heliostat incorporates an innovative system of fixed and motorized mirrored panels designed to capture sunlight and redirect it into the retail atrium and onto the landscaped terraces. At night the heliostat’s integrated lighting will display video interpretations of Sydney landscapes. reF: http://kennovations.com.au/architectural-solutions/architectural-heliostats/one-central-park-architectural-heliostats-light-reflectors/ Although I'm a little concerned how they would work.  As the mirrors are positioned horizontal Otto the ground , How does sunlight fall upon them?  Are those mirrors on the smaller tower and will they reflect light back up into the mirrors above them ? That would produce too much glare for the residences located below the heliostats.  Are the heliostats mounted onto a large arm that will raise them up to vertical?  Cant wait to find out? Come back later for more info... 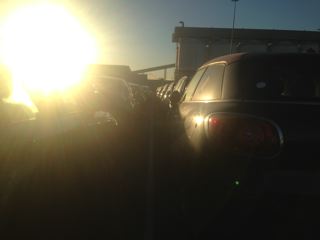 Design and planning of Lighting fails to address workplace tasks. 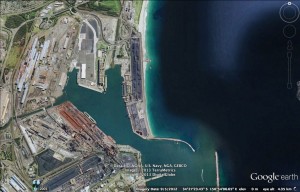 the google earth view illustrates the set up for AAT terminals at Pt Kembla NSW.  New cars are delivered to the Port from manufacturing plants around the world. Drivers then discharge them from the ship and park them wharfside.  The cars are then collected for delivery to dealerships around the state.  In designing the car parking arrangements the engineers/planners made the dreadful mistake of positioning the carpark columns on an east west axis.

Due to the huge numbers of vehicles involved drivers are instructed to park the cars within 400mm of each other and the parking spaces barely accomodate the width of your average car.  Of course there is a company policy of "Zero Damage" and prevention of damage to vehicles is the companies highest priority. On this occasion the operation was

commenced before dawn, As the sun rose the drivers were forced to drive the cars directly into morning sun severly impairing the drivers vision, and therefore increasing the opportunity for an accident to happen.   When ever designing lighting in the workplace, and its obvious in this case that the engineers only considered electric lighting for night time operations, it is vitally important to conduct a thorough analysis of tasks undertaken in the workplace at any time of day or night.  By conducting these studies then problems involving natural or electric light can be eliminated in the design phase

The recent events in detroit saddened me.  Although Never having visited the city, it's influence on my cultural upbring was still enormous Detroit destiny - Mobile 1

It is a battle for us cyber challenged oldies to promote our ideas and concepts to prospective clients. Rendering has developed to such a level that it can overwhelm a project, but at the high end market, it is an expected component of a pitch. To achieve a high level of sophistication you need talented programmers and powerful computers. Follow the link to see an example of what is possible. It is a 98% rendered CGI animation, mind blowing in its realization.

Thanks to Garfield Darlington for passing on the link; 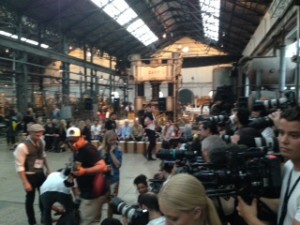 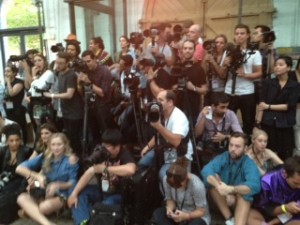 The paparazzi ready themselves 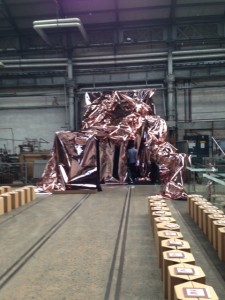 Entrance/ Exit to the catwalk

It was great to be involved with Australian Fashion week again, especially when it was held at the Locomotive Workshop, (Australia Technology Park).  A museum space I helped design as part of my internship with Petra Kleegraffe.